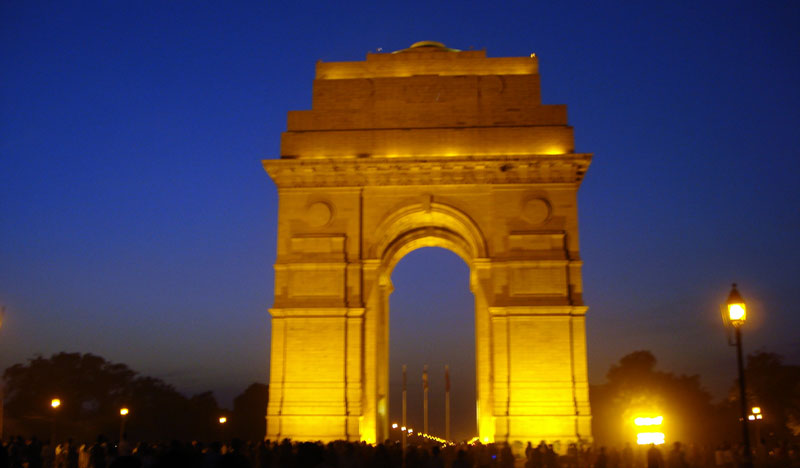 Delhi, India's capital territory, is a massive metropolitan area in the country's north. In Old Delhi, a neighborhood dating to the 1600s, stands the imposing Mughal-era Red Fort, a symbol of India, and the sprawling Jama Masjid mosque, whose courtyard accommodates 25,000 people. Nearby is Chandni Chowk, a vibrant bazaar filled with food carts, sweets shops and spice stalls.

Agra is a city in northern India's Uttar Pradesh state. It's home to the iconic Taj Mahal, a mausoleum built for the Mughal ruler Shah Jahan's wife, Mumtaz Mahal (who died in childbirth in 1631). The imposing main building features a massive dome and intricately carved white marble inlaid with precious stones. This is set behind a reflecting pool inside a courtyard defined by 4 minarets.

Jaipur is the capital of India's Rajasthan state. It evokes the royal family that once ruled the region and that, in 1727, founded what is now called the Old City, or "Pink City" for its trademark building color. At the center of its stately street grid (notable in India) stands the opulent, colonnaded City Palace complex. With gardens, courtyards and museums, part of it is still a royal residence.

Day 01: Goa to Delhi Via Flight
Pick up from Delhi Airport and proceed to hotel, New Delhi: designed and built by the British in the 1920's it's a city of wide boulevards impressive Government buildings, green parks and gardens. First you will visit two monuments from's past Humayun's Tomb and Qutub Minar. Then your drive takes you along the ceremonial avenue, Rajpath, past the imposing India Gate and Akshar Dham. Overnight stay at Delhi.

Red Fort : Home to Mughal Emperors for nearly 200 years, the Red Fort or Lal Kila was converted to barracks for the British colonial army. The iconic landmark recognized by its red sandstone architecture has a rich set of stories dating back to India's pre-independence era. This massive time-tested fortress today is the backdrop for large scale national events such as the Republic Day and Independence Day.

Jama Masijd : India's largest mosque, Jama Masijd a sight to behold is definitely among the places to visit in Delhi. The magnum opus mosque constructed by Mughal ruler Shah Jahan stands tall at 40 ft with 4 angles, 2 minarets and can contain 25,000 devotees.

Jantar Mantar : Among most popular places to visit in Delhi is the Jantar Mantar, an ancient observatory built by Maharaja Jaisingh of Udaipur in 1794 on the main Parliament Street at Connaught Place. The instruments at Jantar Mantar are undoubtedly fascinating for their ingenuity however the high-rise buildings around have obstructed accurate observations.

Bahai (Lotus) Temple : The ever-popular lotus-shaped Bahai Temple in Delhi is the last of the seven major Bahai temples around the world. A mesmerizing structure made of pure white marble, standing against a lush green landscape, the lotus depicts a symbol common to all religions.

Day 03: Delhi - Agra
After morning breakfast proceed to Agra check in the hotel. In the afternoon reach and check in at your hotel. Then proceed for the city sightseeing tour visiting The Taj Mahal, which is entirely made of white marble and its walls are decorated with exquisite pietra dura (precious and semi precious stone inlay) work. Also visit Agra Fort (also called the Red Fort), which retains the irregular outline of the demolished mud-wall fort of the Lodis Then back to hotel and overnight.

Day 04: Agra - Jaipur via Fathepursikri Sightseeing
After morning breakfast proceed check out for hotel and drive to Jaipur on the way visit Fatehpur Sikri - built in Red Sandstone in honor of Saint Salim Chisti, who foretold the birth of 3 sons to emperor Akbar, an example of robust stability combined with originality each important edifice here represents a type by itself. Notable among them is the Diwane Khas, Punch Mahal, The Tomb of Salim Chisti, and the Buland Darwaza, then continue drive to Jaipur and check into hotel. and overnight at Jaipur.

Day 06: Jaipur - to Goa
After breakfast check out from hotel and proceed to Delhi and drop to you on Delhi Airport. Tour ends

Get free qoute for your customize tour package from experts in 48 hours...